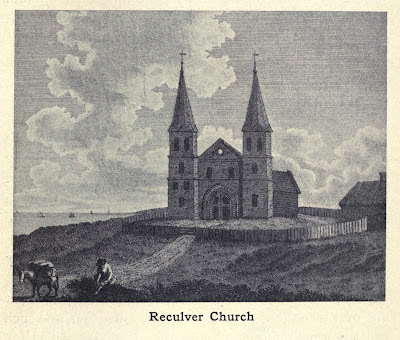 Thank you for your kind introduction to Mrs. Frande. It was a delightful afternoon in which to sample such tea and delicacies, in addition to entertaining company!  I have written a letter of appreciation to Mrs. Frande and hope I may join you on our returning visit en route back to London. We arrived safely to Kent and have traveled to Reculver, of all places!  You might wonder as to what would bring us to such a place, but Mr. Ward has a friend, Mr. Bosworth, with an extreme interest in archeology. He is residing in a little cottage for the summer, whilst we stayed comfortably at the local inn.

Doubtless I need apprise you of wind or water of the place! Our journey was largely uneventful, and I did gaze upon the beauty of the Twin Sisters of St. Mary’s (Reculver Church) on the cliff, as we made our way upward toward our final destination. The church still stands after the demolition, which now appears rather imprudent. The expectation that those gentlemen had of it falling to the sea has not been met. I suspect they were rather hasty in their use of gunpowder. Indeed, I remarked to Mr. Ward, “Could the gunpowder have not been put to better use with something else?” He only laughed and said he could not explain why it held such fascination with certain members of his sex.

Mr. Bosworth has been a most gracious host!  There is no Mrs. Bosworth, and I have been happy for the invitation in accompanying the gentlemen on their explorations of Roman ruins. Mr. Bosworth has a growing collection of coins and pots and all manner of Roman things—which he calls artifacts, because they are historic in nature. At the next opportunity, I shall remember to call some article of Mr. Ward’s clothing that has outlived its usefulness an “artifact.”

To-morrow Mr. Bosworth has business on the Isle of Sheppey for the day. I suggested to Mr. Ward that we venture down to the seaside for a leisurely walk and perhaps we shall take some refreshments.  The prospects from the church are beautiful indeed, but I am eager to gaze upon the sea from its shore, as well.  So I shall leave you here and write again soon,

My sincere thanks for your generous hospitality.  I spoke to you of the possibility of meeting George Bosworth and indeed, here we are!  Charlotte has been ever cheerful and joined the party on many expeditions and made a fine joke to me about the gunpowder used to employ the demolition of Reculver Church. Is there a manner of explanation to the fairer sex about its usefulness and importance that could entice her to believe that they are either?  I think not.

We have visited a few Roman sites and have found several artifacts of coins and pottery, which I shall show you on our return visit. The weather has been pleasant enough and we have enjoyed our stay heretofore. To-day, however, held an unwelcome--although in retrospect, not wholly unexpected, discovery. We have thus far limited our excursions to the village and surrounds, high above the shore, but as George was traveling to the Isle of Sheppey on a manner of business, we decided to make our way down to the sea. Charlotte in particular, was eager for a walk. Mr. Bosworth had noted that this was where we might discover some fossils, and I was interested in perhaps finding something of Nature instead of something of Roman in nature. Indeed, I found all manner of fossils strewn loose about the shore, my first being a Striatolamia [sand tiger shark tooth]. Charlotte found a collection of Arctica bivalve shells not three minutes into our walk. She has a particularly keen awareness and the eye of a falcon when it comes to spotting small objects of interest. We walked along the shore and made our way in the direction of Reculver Church. It was not directly in our path, and we were not in any particular hurry to go in that direction with any want of a preconceived destination. We stopped to catalogue our finds and store them safely. By and by we had a pleasant meal accompanied by some libations and soon continued down the shore. I had noted the various striations of earth that make up the cliff. As I was pointing out the difference in the London Clay and Harwich Formation, there looked to be part of a coffin exposed. I was earnest in my attempt to shield Charlotte from the knowledge of the particulars, but she is too quick-witted and surmised immediately upon what we were gazing.

She said it all in one breath and stood staring and stupefied as she was then struck speechless. I could not deny or attempt to avert her eyes in a different direction. I remained calm, as a gentleman must in these sort of situations and I said, “Yes, the forces of Nature give not one whit for us mortals.”  Apparently this was not the correct thing to say for she was able to recover her manner of speech and said, “Oh, Mister Ward! We mustn’t make a joke at the expense of the departed!  For this was someone’s . . . mother, or father, or-or-or someone!”

I did not induce her to feel comfort as I said, “I should think that given the age of it, there would not be any family alive to see this particular . . . person, whomever it is.”  She looked upon me as only that intimate partner can upon her own husband and I felt the nature of my further faux pas immediately.

“My dear, my deepest apologies,” I hastened to reply. “Let us take no more time in this place but return toward the inn, that we may come away from such unpleasantness.”

She took my arm, and thus we began to make our way back toward the main road. She was deep in thought, and averted her eyes toward the ground, which I thought most prudent. We were able to pass thither by yet another coffin that was exposed and had gone unnoticed beforehand. It was indeed fortunate because this particular coffin had a hole in it and I could see some bones of an exposed skeleton within!

As I was thinking thusly of this good fortune that she was looking down and not up, she stopped and said, “Nathanial!  I can’t bare this! It is too much to be borne!”  And there I looked down where she pointed to some bones on the ground. It was at this moment that I saw that the skeleton for which I had believed to be completely intact overhead, had some part of it fallen down below. Indeed, it was then that we both began to see many bones everywhere. Gone were the fossils, replaced by these remains.

It was a rather gruesome day and I think it shall be a long time before we take another walk along any foreshore below a cliff!  Enclosed find a drawing of one of Mr. Bosworth’s Paleolithic findings and you shall inspect the Roman artifact in person when next we meet. Until then,

I remain yours &c. 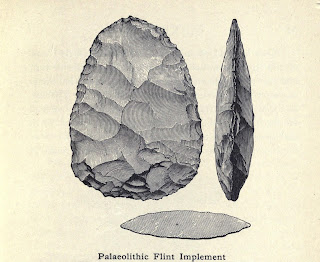 Dear Catherine,
To-day is raining and I relayed to Mr. Ward that I shall remain indoors whilst he and Mr. Bosworth go on another expedition. I confess that I am happy for the respite given yesterday’s unfortunate event. I doubt very much that we will take a second trip down to the foreshore given a rather gruesome discovery. It is true, the accounts of finding not only fossils but the remains of other things . . . .

Papa and Mama sat in their respective chairs in the drawing room reading their letters after their evening meal. Papa finished his letter first and lit his pipe, glancing over at his wife. He made note of her furrowed brow and reasoned that she was reading Mrs. Ward’s recounting of her seaside stroll. She let out a sigh and folded the letter, placing it back on a tray.
Papa said, “I take it you read about—“

What news! What horror!  But then she smiled slightly and looked at Papa. “I am very grateful that I am not obliged to accompany you on your excursions.”

Papa smiled in return. “Indeed, my dear. You are far too delicate to tolerate the coarseness of such events. I would not wish you to be other than you are.” He reached over and gave her familiar pat on her hand.

Mama blushed at such a compliment. “Oh, Mister FitzWilliam,” she said, and rose to retire for the evening. He took a final puff of his pipe, extinguished it, and rose to follow.

*To see more of the history of Reculver, click HERE.